The Andaman & Nicobar Islands were shrouded in mystery for century’s beaches of their inaccessibility. These are the paragon of beauty and present a landscape full with scenic and picturesque extravaganza. These Island shimmer like emeralds in the Bay of Bengal The dense forest which cover these Islands and the innumerable exotic flowers and birds create a highly poetic and romantic atmosphere. Here the white beaches on the edge of a meandering coastline have palm trees that sway to the rhythm of the Sea.The beats of tribal drums haunt the stillness and technicolour fish steer their way through crystal clear water.

The unparalleled beauty of these islands create in men a love of nature with a caressing tenderness,a wistful fondness for all its delicate nuances.The enveloping atmosphere with its subtle harmonies of light and shade fragrance and exhales the paradise visionary splendors and the music of the birds that defies definition would develop creative and constructive feeling in the hearts of those people who come here to enjoy the beauty of nature. He would like to rebel against the stereotyped moulds and forms into which life is so called “modernman”is cast. He would be under the impact of the complex mood of infinite longing and tragic helpless,the yearning that craves for expression yet defies expression the inconclusive struggle between emotional apprehension of life and the articulation that must transcend personal emotion. The Andaman and Nicobar Island have great maritime importance. During the British period political leaders consider dangerous to the interests of the Raj and other dreaded criminals were deported from mainland to the cellular Jail-The Indian Bastille,situated on the sea coast of Atlanta point in the North-Eastern part of Port Blair.Thus these Islands were infamously known as the ‘Black Water Prison or Kala Pani’.

A clear history of the Andaman & Nicobar Islands can be had only from a British Survey of these islands conducted in 1777. The Andaman & Nicobar Islands remained the abode of the Negritos and the Mongoloids respectively, who occupied the Islands for centuries. These islands remained secluded from the mainland till the end of the 18th Century when people from the outside world first arrived. The history of these islands could be divided into four broad periods the period of seclusion and piratical disturbances 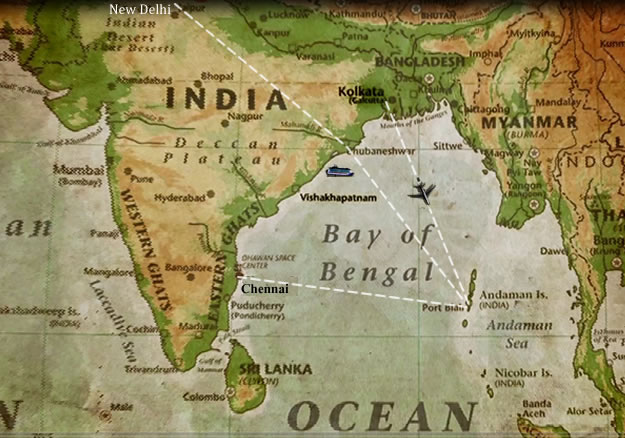 In the Second Century, the Andaman and Nicobar Islands were located in the maps prepared by the great Greek astronomer, mathematician and geographer, Claudius Ptolemaeus, which possibly is the earliest reference to these islands. The early history of Nicobar is not well known although these islands were familiar to traders in ancient times, the islands being situated close to the trade route to the Far East. Though little is known about Portuguese activities in these islands, it is evident that the Portuguese missionaries started preaching Christianity among the islanders. The Nicobarese language also reflects a few Portuguese words.

The Union Territory of the Andaman and Nicobar Islands, is situated between 6° and 14° North Latitude and 92° and 94° East Longitude. The islands located north of 10° north latitude are known as Andaman Group of islands while islands located south of 10° north latitude are called Nicobar Group of islands. The climate of the islands can be defined as humid, tropical coastal climate. The islands receive rainfall from both the south west and north east monsoons and maximum precipitation is between May & December.

The original inhabitants of the islands lived in the forests on hunting and fishing. There are four Negrito tribes, viz., the Great Andamanese, Onge, Jarawa and Sentinalese in the Andaman group of islands and two Mongoloid tribes, viz., Nicobarese and Shompens in the Nicobar group of islands.

How to Get There

The Directorate of Civil Aviation, Andaman and Nicobar Administration has introduced Sea-plane services to tourist places like Havelock, Diglipur and Hut Bay. In addition, daily helicopter services are also available from Port Blair to other inter-island tourist destinations, such as Neil, Havelock, Diglipur, Hutbay etc.

Regular passenger ship services are available to Port Blair from Chennai, Calcutta and Vishakhapatnam and back. There are three to four sailings every month from Kolkata and Chennai to Port Blair and vice-versa. There is one sailing from Vishakhapatnam in a month. The voyage takes about 50 to 60 hours during fair weather and the ship normally berths at Port Blair for about two to four days.

It is not a tough task to reach Port Blair via road. A number of buses connect the destination to other major parts of Andaman including Rangat (163km), Baratang Island (100km) and Diglipur (296km). So, tourists have an option of taking these buses to reach different parts of Andaman. Some private bus operators also operate buses from Port Blair to different regions on regular basis.

Indian nationals need no permit to visit the Andamans. However, visiting to tribal reserved areas in the Andaman and Nicobar Islands is prohibited.

All Foreign nationals required a permit (RAP - Restricted Area Permit) to visit the Andaman Nicobar Islands, which is easily available on arrival at Port Blair by flight or ship from the Immigration Authorities for 30 days subject to availability of valid visa. This is extendable for another 15 days with permission and the delegated authority to extend permission is the Superintendent of Police, Andaman District, Port Blair.

For Day and Night Visits

For Day Visit Only

The Andaman & Nicobar Islands are characterized by two distinct native cultures. One is of the Negrito population in the Andaman’s and other is of the Autochthones, i.e. the Mongoloid Nicobarese and Shompen. Both during pre- and post-British periods and even after Independence, these two cultures have maintained their distinct identities. The main aboriginal group in the Andamans is the Onges, who live on Little Andaman. Onges, like other Andamanese tribes, are of Negrito origin. They practice food - gathering, hunting, honey - collecting and fishing, and are the only tribe on the islands, who freely accept contact with the outside world. In the Nicobars, the only aboriginals are the Shompens, who are averse to any contact with the outside world. The Nicobarese, the largest group, seem to be of mixed Burmese, Malay, Mon and Shan origin. They are a friendly and cheerful lot, who do not accept money and prefer the barter system. Communing with the dead is one of the many intriguing rituals practiced in Nicobar.

The Andaman and Nicobar Islands, often described as green islands in the marigold sun, lie as a long and narrow broken chain in the southeastern Bay of Bengal . This two-district Union Territory is composed of 572 islands of various sizes of which only 37 are inhabited, and it is the most isolated part of the Indian union. One-fifth population of this remote part is tribals or aboriginals, Other Crafts are-

Mammals: Out of 55 terrestrial and 7 Marine mammal species reported so far, 32 species are endemic.

Reptiles: There are 76 terrestrial reptiles of these 24 species are endemic.

Coral and Coral reefs: So far, 179 species of corals belonging to 61 genera have been reported. Reefs are mostly fringing type on eastern coast and barrier type on the western.

Andaman and Nicobar are mainly the home of the tribal people, but in these islands you will observe a unique culmination of several Indian cultures. Due to cross cultural unity, the islands’ people have given rise to their own share of colourful fairs and festivals. In addition to their own festivals, these islands celebrate several festival derived from India. Among the various festivals, most popular include Durga Puja, Janmasthami, Holi, Deewali, Onam, Pongal and Christmas. The fortnight long Island Tourism Festival is the main festival of the Andaman and Nicobar Islands, which highlights excellent art and crafts, unique marine life and traditional dances and songs of Port Blair.

Andaman and Nicobar islands are more popular for beaches, swimming, fresh air etc. but shopping in these islands is a delightful experience. Andaman’s capital Port Blair is the main shopping centre, where you can shop multi hued corals and seashell souvenirs. Aberdeen Bazaar in Port Blair is the main commercial centre of Andaman and Nicobar islands. At Aberdeen Bazaar, you will find a few Government Emporia (Cottage Industries Emporium and Gram Khadi Commission) and plenty of private shops alongwith the eating joints, pubs that make your shopping a wonderful experience.

Other shopping centres are situated at Prem Nagar, Goalghar, Delanipur and Junglighat; all of these are just 3-4 kms away from Aberdeen Bazaar. While you shop in Andaman and Nicobar, must look for famous artifacts such as shell jewellery (earrings, bracelets and objects d’art), mother of pearl jewellery, palm mats, coconut shell lamp-shed In addition to these, also buy woodcrafts such as walking sticks, ashtrays, bowls and furniture made of local padauk.