Andhra Pradesh is rich in historical monuments and many holy temples. Tirupati in Chittoor district hoses one of the most famous temples in India. The presiding deity is known as the Venkateswara. The main temple is situated on a hill top, Thirumalai, and is a masterpiece of south Indian architecture.The capital of the Andhra Pradesh is Amravati.

Fringed by the Bay of Bengal, many an alluring beach is tucked away along the coastline. The sea face of Visakhapatnam, besides its bustling harbour, has a single massive rock jutting into the ocean at a height of 174 m. Referred to as the Dolphin's Nose, the gigantic cliff has a powerful lighthouse that sends signals as far as 65 km. The beach front of Visakhapatnam is peaceful and enticing. Rishikonda and Bhimli are calm, making them aquatic playgrounds. Bhimunipatnam, 24 km from Visakhapatnam is a pleasure resort at the mouth of the river Gosthani. The idyllic beaches at Bapatla, Kalingapatnam, Maipad and Manginapudi are ideal picnic spots.

The northern area of Andhra Pradesh is mountainous. The highest peak Mahendragiri rises 1500 m above the sea level. The climate is generally hot and humid. Annual rainfall: 125 cm. The Krishna and Godavari are the major river systems in the state. 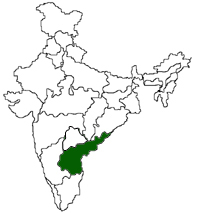 How to get there

Andhra Pradesh lies at coastal part of southern India and famous for its temples, natural resources and rivers. The beauty of the place calls people from all across the globe throughout the year. But, there is always a best time to visit any place. On an average, the temperature remains hot and humid in the state. Best season to visit Andhra Pradesh is from October to February to visit the place as the temperature remains somewhere around 16°C. It is an ideal time for sightseeing around the different destinations of the state.

Over 85% of the population of Andhra Pradesh speaks Telugu. However, there are important minorities. Tamil is widely spoken in the extreme south region, and on the border of Karnataka there are pockets of Kanarese or Kannada speakers.

As the home of rich folk tradition, Andhra Pradesh offers a variety of performing arts unique to its culture. Kuchipudi is the classical dance form of Andhra Pradesh. Lacquer toys, anakapalli articles, nirmal painted pottery, bidri-lead inlaid black metal trinkets, palm and slate articles, as well as Gadhwalk, Pochampalli and Dharmvaram silk saris are some of the amazing handlooms and handicrafts the state is renowned for.

Cuisine of Andhra Pradesh has a distinct flavor and is relished by many epicureans. Rice is the staple food and chillies dominate the native taste. The ubiquitous Andhra pickle, spicy in taste and flavor is the most appetizing dish. Even Gongura chutneys enhance the basic flavor of a meal. Papads roasted or fried are an often-preferred addition. To round off a sumptuous lunch, kheers, a variety of sweets and paans are veritable specialties.

Andhra Pradesh has gained tremendous prestige and importance in the past years for its brilliant contribution in the field of music, dance and drama. Three kinds of people live at Andhra Pradesh, and they all have contributed to the fields of Arts and Crafts in Andhra Pradesh to make it one of the principle states in India. They include the original inhabitants, hill dwellers and tribal people. They have designed their own dances and in course of time these dances have won the hearts of millions across the world. Dance as an art form in Andhra Pradesh can also be classified as Social Dance, Religious Dance and Dance as a pastime. Apart from its dance form, artifacts such as leather and wooden items of Andhra Pradesh have gained recognition across the globe.

The Banjara Needle Craft (Embroidery)
This craft is believed to have been originated among wanderers and nomads.

The Bidri Craft
This style of craft originated in Andhra Pradesh’s main city, Hyderabad. In this art form, silver work is done on metals with intricate carving. Using a sharp chisel, Bidri art entails engraving on a metal base. This metal base can be zinc, lead, copper or tin alloy. On these engraved patterns, wrapping of silver wires is done using a hammer. Hukkah bases, spoons, vases, different size boxes, pencil boxes, paper cutters, buttons and ash trays are some of the most popular bidriware products

The Budithi Brassware
This art style is also one of the unique in Andhra Pradesh. This craft is believed to have been originated in Budithi, a quaint village. Beautiful shapes are created from alloy in this art from. Modern as well as antique styles are used in these shapes.

The Metal Crafts
This craft style originated in Pembarthi a small village in the state of Andhra Pradesh. During Kakatiya reign, brass work was done intricately here

The Durgi Stone Craft
Originated from Durgi, located a small distance from Macherla, this art form is believed to have been originated. In Nagarjunakonda Museum, some exquisite pieces of this popular Durgi stone craft have been displayed

The Lacquer Craft
A distinguished appeal is imparted to an art product by applying lacquer on wood and this art form is usually seen in Andhra Pradesh’s Ethioppaka Nirmal art is popular in Adilabad district’s Nirmal town. This art form encompasses characters and scenes from Ramayana and Mahabharata, famous Hindu epics. Veena is also manufactured in the state and it is considered to be a popular art from. This is the most important facet of Carnatic music known for its harmony and melody all over the world.

Silver filigree is another art work in the state that is believed to have been originated in Karimnagar. Artisans working with dexterity come up with unique artefacts like hookahs, pann dans, Jewel boxes and many more. The state has today gained a lot of popularity for its amazing art and craft products. Since erstwhile times, the artisans and craftsmen of this state have gained a lot of farme for their work and skill. From generation to generation, this art craftsmen ship and skill have been passed on and is still flourishing

location of the state of Andhra Pradesh is between 77° and 84°40'East Longitude and 12°41' and 22°North Latitude. It is located in the southeastern part of India. Andhra Pradesh is the third largest state in India. The total area that is covered by the state is about 2, 75,068 Sq.Km.

The whole state can be segmented into three main regions. These regions are:

Shopping in Andhra Pradesh can be a real fruitful experience

Famous for its Kalamkari and Bidri work, in addition to Buddhist Nirmal painting, buffalo hide puppets, ikat garments and the delicate silver filigree of Karimnagar, Andhra is a veritable treasure trove of beautiful crafts fashioned by skilled artisans. Kalamkari takes its name from the implements of the humble ‘Kalam’ i.e. pen Ikat is a form of weave where dyed threads are patterned into colorful fabrics. The repertoire of fine fabrics is not limited to ikat. Silk woven into a primarily cotton fabric, ‘himroo’ was the cloth of choice for the luxurious garments of the noblemen. The town of Pochampalli, Dharmavaram, Venkatagiri and Narayanpet give their names to special weaves, each unique to one town. A sari in any of these styles is bound to please any lady