Telangana, the 29th and youngest state of India, formally recognized on June 2, 2014 is a treasure trove of tourist destinations. One of the largest states in South India, Telangana is known for its hospitality and multicultural and pluralistic society. Hyderabad, the capital city of this state is the fifth largest city in India and home to some of India's best educational institutions, public sector and defence companies and a thriving global services sector and film industry.

The name "Telangana" refers to the word Trilinga Desa, earned due to the presence of three ancient Shiva Temples at Kaleshwaram, Srisailam, and Draksharamam. A more historical reasoning is that during the reign of Nizams, the region was known as Telugu Angana to differentiate it from the areas where Marathi was spoken 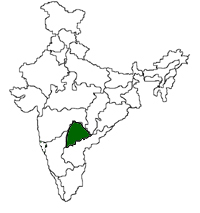 Telangana state is a blessed land, thriving with vibrant arts and crafts scene. Each region has a unique story to tell. The patronage of kings and dynasties for several centuries led to a unique synthesis of various cultures, which is clearly visible in the development of a unique arts and crafts tradition in the state.

Bidri craft is the pride of the Telangana region. This unique art of silver engraved on metal was brought initially by Iran migrants to the region. Bidri art involves using an alloy of Copper and Zinc, called Gunmetal. Telangana is famous world-wide for its amazing Bronze castings that require exquisite skills for creating incredible idols.

The intricate sheet metal brass engravings and artefacts made here can be traced back to more than 800 years.

Pembarthi Metal Craft is a popular metal handicraft made in Pembarthi of Warangal district, Telangana State, which is widely known for the exquisite sheet metal art works. The intricate sheet metal brass engravings and artefacts made here can be traced back to more than 800 years.

Pembarthi is a village situated about 80 km from Hyderabad. The region has witnessed glory during the period of the Kakatiya dynasty which had spanned 500 years. Pembarthi has a rich history of outstanding workmanship of the Metal workers or the “Vishwakaramas”.

Since most of the ancient temples in Telangana region were built under the patronage of the Kakatiya rulers, these temples bear the signature style of Pembarthi craftsmen. The metal craft reached the pinnacle of perfection following the higher degree of skills that were displayed by the master craftsmen. The Vishwakaramas of the region were renowned for their rare skills in this form of metal sculpture. It is also known popularly as the Pembarti Brassware. It has become an essential artefact in every handiwork exhibition and has also become synonymous with Telangana’s artistic heritage. 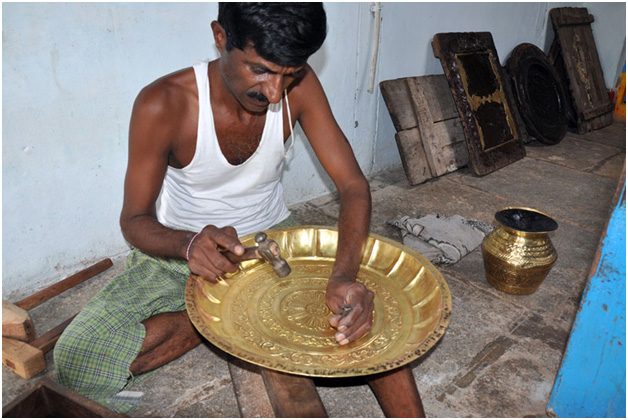 This unique art of silver engraved on metal has always enthralled people with its lure. Bidriware is a renowned metal handicraft that derives its name from Bidar, presently in Karnataka. It was believed to have originated in 14th century AD during the reign of Bahamani Sultans.

This art form named after its place of origin, Nirmal is being practiced by the 'Naqash' right from the 14th century.

This art form is unique to the state of Telangana and made mostly in Hyderabad currently.

It is a tribal metal craft practiced in Jainoor Mandal, Adilabad District of Telangana.

Hyderabad - The City of Pearls is a one-stop destination for some of the rare, luminescent, soft and tear drop pearls of all sizes, hues and forms

Banjara Embroidery and Needle works are made extensively by the nomads of Telangana.

How To Get There

Telangana is well-connected to other parts of India with extensive rail and road network. Important national highways crisscross the length and breadth of Telangana linking the state with other neighboring states. Secunderabad railway junctions, also the headquarters of South Central Railways and Kazipet& Warangal Railway junction connect the state to key cities and regions of India, along with numerous other stations.

Rajiv Gandhi International Airport, located at Shamshabad near Hyderabad is adjudged as one of the best airports in the world. It connects Hyderabad, the heart of Telangana with various other national and international cities and capitals. The airport offers visa-on-arrival facility for citizens from more than 140 countries, a boon for overseas tourists.

Cuisine of Telangana has a distinct flavor and is relished by many epicureans. Rice is the staple food and chillies dominate the native taste. The ubiquitous Andhra pickle, spicy in taste and flavor is the most appetizing dish. Even Gongura chutneys enhance the basic flavor of a meal. Papads roasted or fried are an often-preferred addition. To round off a sumptuous lunch, kheers, a variety of sweets and paans are veritable specialties

A rural set-up to give you a feel of ethnic Indian village feeling amidst the busy village life! This is exactly what Shilparamam is,a place, which gives you a feel of authentic village nativity in the busy capital city of Hyderabad. A must-see place when in Hyderabad, Shilparamam is an arts and crafts exhibition hub, in the form of a village set up located in Madhapur, Hyderabad, Telangana. The main idea behind the establishment of the village was to create an environment for of a village for the locals and provide the traditional artisans a stage to exhibit their art. The place also hosts ethnic festivals round the year.

Shilparamam, the famous crafts village in Hyderabad was set up in the year 1992. The place is right in the heart of the state capital, just a few kilometers from the hustle-bustle of the city. The site is spread over an area of 65 acres of land in the hub of the corporate world. Shilparamam gives a very picturesque view and a traditional ambience. It is rich in tradition and cultural heritage. This is a platform established by the government to promote and preserve Indian arts and crafts and to motivate the artisans. Shilparamam is tribute to all the traditional and cultural craftsmen of Telangana. It brings out the imaginative senses of the visitors with its rustic richness and creativity. Shilparamam is replete with greenery and provides a serene environment. It is sculpted with woodwork, cloths, Jewellery, and local crafts of each region of the country. The rural nest set up amidst the trees, is the epitome of a typical Indian village. The place has over 15 life-sized huts, which are constructed carefully out of baked clay and thatch, to bring out the true flavor of rural and tribal lifestyles. The lush environment of Shilparamam completely sculpted with woodwork, cloths, jewellery, and local crafts of each region of the India showcases a plethora of artistic ethos. Shilparamam is set in the midst of cascading waterfalls gardens, and natural rock heights.

Laad Bazaar is a very old market considered popular for bangles in Hyderabad. It is located on one of the four major thoroughfares emerging from the historic Charminar.

After decades of movement for a separate State, Telangana is surrounded by Maharashtra and Chhattisgarh in the North, Karnataka in the West and Andhra Pradesh in the South and East directions. Major cities of the state include Hyderabad, Warangal, Nizamabad and Karimnagar. 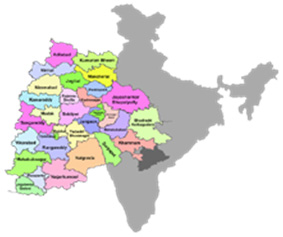