Karnataka, the ‘lofty land’ is bounded by Andhra Pradesh in the east, Maharashtra in the north and Tamil Nadu and Kerala in the south. Garden city Bangalore, Jog Falls, the beaches of Kanwar and Malpe, Golgumbuz in Bijapur, the stone temples of Belur and Halebid, Mysore place, the list is endless. Raging waters of Tungabhadra Endless stretches of Hampi where battles raged, emperors roared and chariots breathed fire, beaches that appear like a dream out of nowhere. Cool hill stations that emerge out of mists like a perfect picture, stubborn rocks that await dauntless climbers, deep corridors of the tropical forests that invite wild wanderers. Dancers who set the night on fire and the chants at dawn that reverberate deep in your soul. Karnataka is an ancient land with a history of over 1,500 years. Here, you can delve into centuries old architectural marvels, walk through famed monuments, get mesmerized by imposing world heritage structures, explore ancient rock-cut caves, experience breathtaking natural beauty, listen to spiritual chants, wake up to the smell of freshly brewed coffee with wildlife surrounding you or feel the tranquility of endless beaches. Everything in Karnataka is an intense experience. Enjoy the diversity and rich heritage of Karnataka.

Bangalore is the capital city of the southern Indian state of Karnataka. It is also known as the Garden City because of its many beautiful gardens and parks. Though the origin of Bangalore is ancient, the present-day city was founded in the 16th century and has since continued to be an important administrative center. Due to the high concentration of IT industry, it also called the Silicon Valley of India. Karnataka is situated on the western edge of the Deccan plateau. It has an area of 191,791 sq km. Bangalore, nicknamed as the Silicon Valley of India, is the Capital of this southern state. Karnataka has a written history of more than 2000 years. Apart from it being subjected to the rule of the Nandas, Mauryas, and the Satavahanas, Karnataka came to have indigenous dynasties like the Kadambas of Banavasi and the Ganges from the middle of the middle of the 4th century AD. The Chalukyas, the Rashtrakutas and others also once ruled over it. 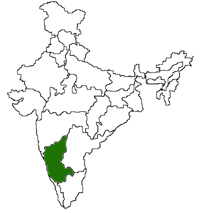 How to get there

By Air
Bangalore International Airport has flights to all the main cities of India and also flights to many West Asian destinations as well as London and Frankfurt.

By Rail
Karnataka is well networked by Major railway stations in Karnataka are Bangalore, Mysore, Belgaum, Mangalore and Bijapur.

By Road
Karnataka is well connected with other states like Tami Nadu, Andhra Pradesh, Kerala, Maharashtra, Pondicherry and Goa.

The tourists flock into the different parts of the state throughout the year because of the diverse land features. The coastal regions are hot and humid while the central is more extreme. However, the most recommended time to visit Karnataka is between the months of November and April, when the days remain pleasant.

Karnataka is blessed with a rich culinary heritage regional food habits differ vastly depending on locally available ingredients; the result is a richly varied spread. Karnataka's cuisine is characterized by distinct textures, flavors, and tastes

The ubiquitous masala dosa has its origins in Udupi, and a whole school of South Indian vegetarian cuisine takes its name from this town

Kodava cuisine is very distinctive, as are the costumes, customs, and festivals of the Kodavas. Pandi curry (pork curry) and kadumbuttu (rice dumplings) are arguably the most delectable dishes in the Kodava repertoire.

Rich in heritage that is gifted by a history that dates back to ages immemorial, the state of Karnataka is unique in the way it preserves its heritage even today. Presence of this unique heritage can be found in almost every sphere of life while on a trip to Karnataka. The arts and crafts of Karnataka play a very important role in Karnataka almost wherever you look. Whether you are visiting the exquisite monuments of Karnataka or shopping for souvenirs in Karnataka, the artistic endeavor of the people of Karnataka is sure to charm its way into your hearts.

The following art and craft is more popular in Karnataka

Karnataka is located in the south western region of India. Spread over an area of 191,791 square km, the state borders the western coast of the Indian subcontinent. Karnataka is situated in the Deccan Plateau and it witnesses the convergence of the Western Ghats and the Eastern Ghats into the Nilgiri Hills. Karnataka covers about 750 km from North to South and about 400 km from East to West. The coastline of Karnataka stretches for about 320 km

Latitude and Longitude of Karnataka

Karnataka shares its western border with the Arabian Sea and the Laccadive Sea. Area wise Karnataka is the seventh largest state in India and it shares its boundaries with one union territory and five states of the country. The union territory of Goa lies to the north west of Karnataka. The state has Maharashtra neighboring it on the north. Telangana stands to the north east side of Karnataka while Andhra Pradesh shares its eastern border. On the south east side lies the state of Tamil Nadu while Kerala surrounds it on the south west side.

Shopping in Karnataka can be a marvelous experience as Karnataka has much to display to the tourists. It is said that Karnataka is a shopper's paradise. With dazzling shopping arcades and shopping malls strewn all around the state, Karnataka has become a shopping hub in India. With its sparkling silks, sandalwood and rosewood carvings and exquisite handicrafts, Karnataka excels as the shoppers paradise.

Karnataka is famous for its shimmering silk and covering of rose and sandalwood. The richness if its couture is reflected in the artistic endeavors of its people. The ancient skills are reverently handed down from generation to generation and artisans are devoted to keep their tradition skills alive