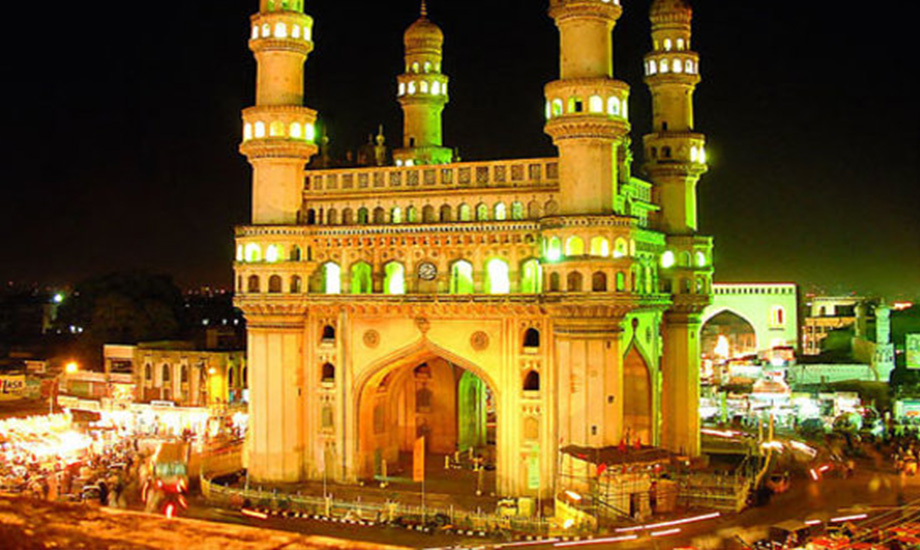 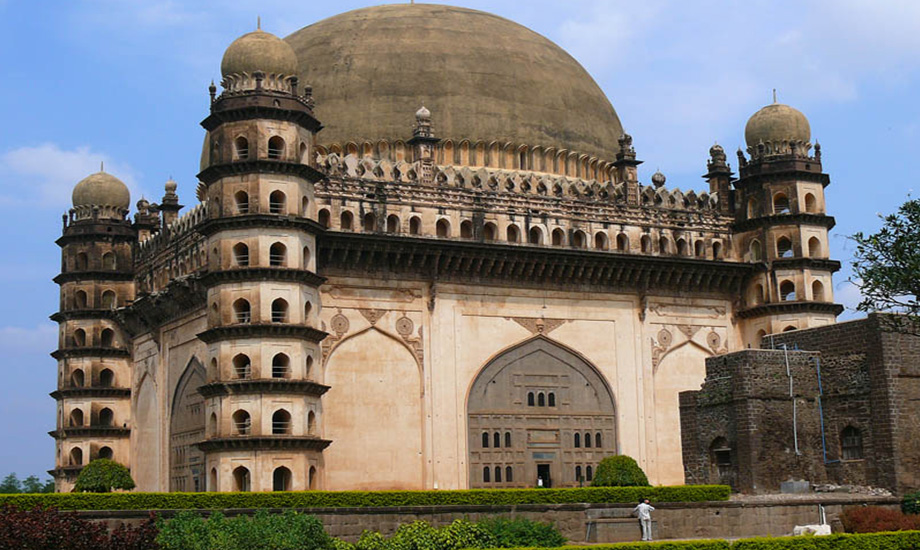 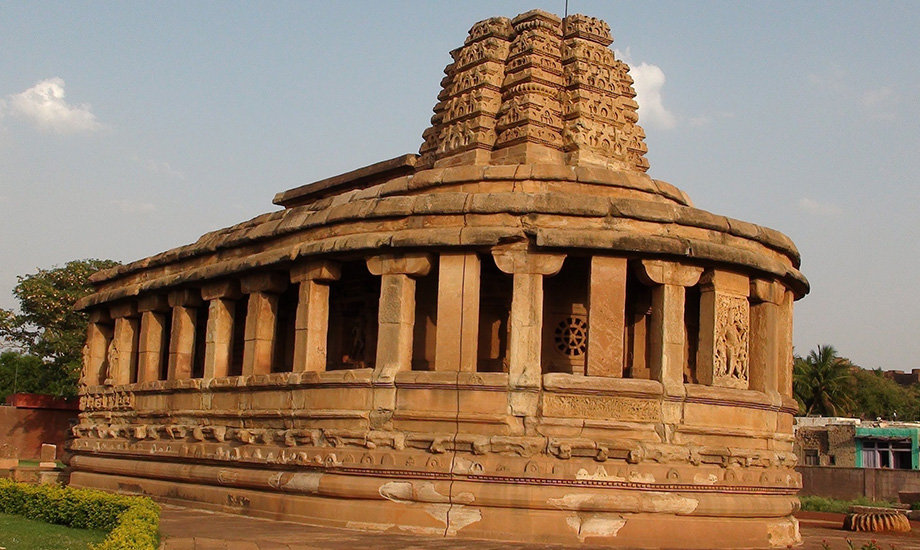 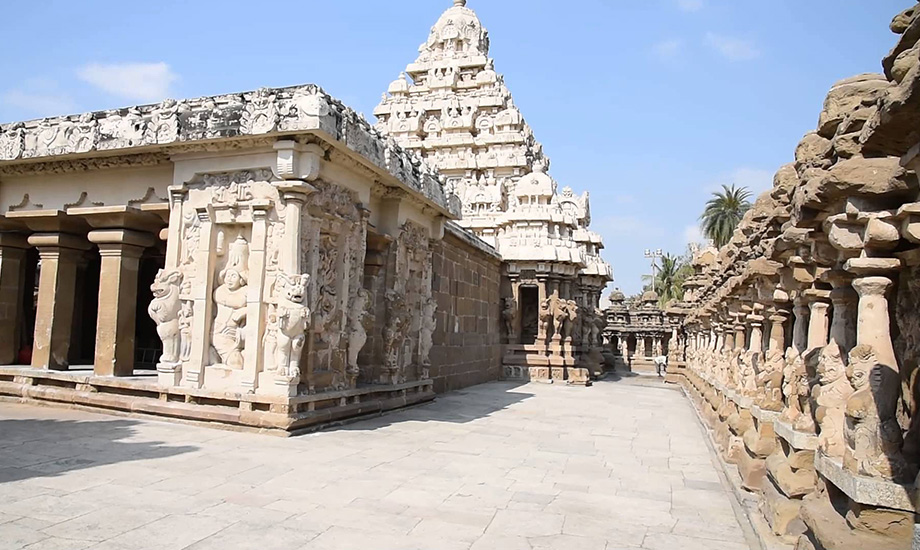 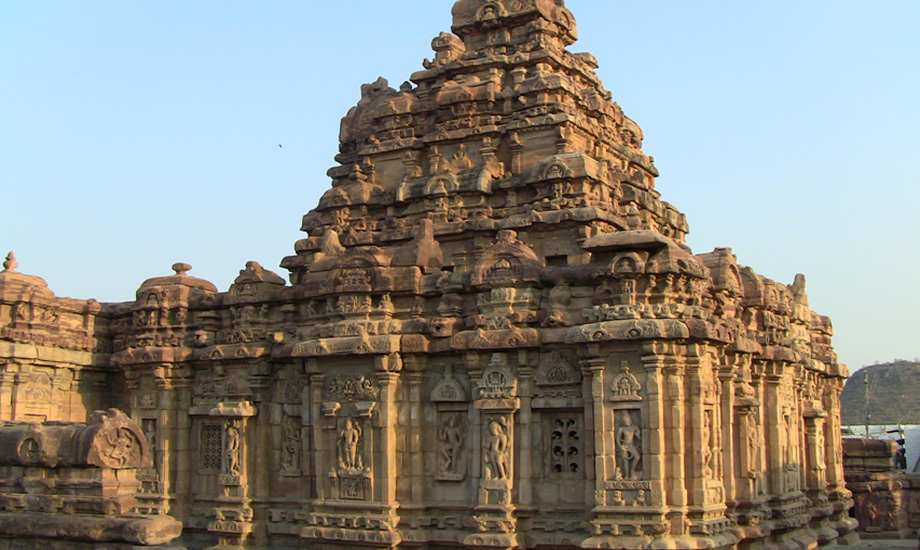 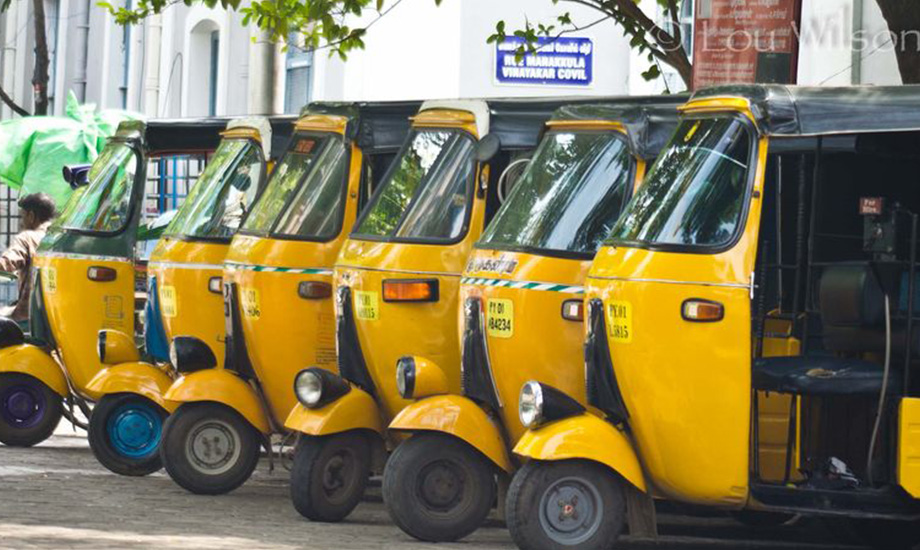 Hyderabad, the beautiful capital of the Nizams opens the ball of this trip that gives you fabulous and unexpected sites at the same time: Indo-Muslim splendours of Andhra Pradesh, radiant architecture of the temples and Hindu palaces of Karnataka. Visit to the UNESCO heritage sites of Hospet and Hampi. Badami, Aihole, Pattadakal: Treasure Troves of early Deccan Art and Architecture

A Journey passes through the colorful Tamil Nadu cities, diversity, and Heritage UNESCO sites and of the galloping megalopolis, the former French counter and the sanctuary city

Hyderabad – often called the gateway to the South Indian identities. Yet, from both it has developed a distinct personality of its own. Today city sightseeing of Charminar, Mecca Masjid, Jami Masjid, Sri Venkateswara Temple, Hussain Sagar, Golconda Fort and Qutab Shah Tombs.

Morning drive to Gulbarga – a Hindu city before the Muhammadan conquest, Gulbarga is a unique synthesis of two cultures. Afternoon start your tour in Gulbarga with the Fort built by Raja Gulchand and later strengthened by Ala – ud – din Bahamni, the fort has 15 towers and 26 guns, one of them measuring 25 feet in length. Inside the fort is the Jumma Masjid fashioned on the lines of the great mosque of royal tombs. The most important monument in Gulbarga is probably the Khwaja Bande Nawaz Dargah. The tomb of the great Sufi Saint, Khwaja Syed Mohammad Gesuy Daraz. This magnificent building in the Indo-Saracenic style is the venue of an annual urus, attended by nearly one hundred thousand people, both Muslims and Hindus. Also worth seeing are Sultan Hassan’s tomb, the tomb of Ghias-ud-din, the fine mausoleum of Feroze Shah and his family.

After breakfast drive to Bijapur upon arrival check in hotel. Later sightseeing of Bijapur – think of Bijapur and the first thing that comes to mind is the Gol Gumbaz the tomb of Mohammed Adil Shah. Gol Gumbaz boasts of the second largest dome in the world. 44 meters in diameter, this dome forms a highly sensitive echo chamber. On the western outskirts of the city lies the mausoleum of Ibrahim Adil Shah II – Ibrahim Roza, said to have inspired the Taj Mahal in Agra. Embracing 1, 16,300 square feet is the Jumma Masjid – one of the finest mosques in India. Here in a beautiful mihrab – covered by a heavy curtain are verses of the Quran, beautifully inscribed in letters of gold. Malik-e-Maidan the largest medieval cannon in the world – is fourteen feet long, weighing about 55 tons. Afzal Khan’s Cenotaph, the Amin Durgah, The Jod Gumbaz.

After breakfast a scenic journey by road from Bijapur to Badami set in beautiful countryside’s of the four of a red sanstone ridge the small rural town of Badami was once the capital of the Chalakyan empire which covered much of central Deccan between the 4th and 8th centuries. En route visit to nearly Pattadakal – a world heritage center, it has 10 major temples representing early chaluyan architecture, where coronations took place and where most of the temples were built between the 7th and 9th centuries. The Virupaksha, Mallikarhjuna and join Temples are quite marvelous to behold included is a visit to Aihole where the Hindu temples architecture can be seen in its embryonic stage –50 temples within the fort wall and 50 outside. Arrive Badami & transferred to hotel.

After breakfast sightseeing of Badami – Rock-cut cave temples, Gateways, Forts, inscriptions, Sculptures that seem to come alive under your eyes…. Badami has to be seen to be believed. Climb a flight of steps to reach the ancient caves – all hewn out o sand stone on the precipice of a hill. Three are four caves here. The first three belong to the Vedic faith and the fourth cave is the only Jain Temple in Badami. The first cave temple – past Shiva’s door Keepers – and there he is the eighteen-armed Nataraja striking 81 dance poses. The largest and most ornamental is the third Cave temple dedicated to Vishnu. Here are some splendid carvings of the Hindu Pantheon, Narasimha – the half man and half lion avatar of Vishnu, Hari Hara, the composite god who is half Shiva a half – Vishnu.

After an early breakfast drive to Hospet and check in hotel, stay for two nights. Your base to explore the spectacular Vijaynagar ruins in the afternoon a visit to Hampi itself only 13 km away and one of the most fascinating historical sites in south India. The superb ruins are set in a strong and beautiful boulder-strewn landscape, which has an almost magical quality. One can still glimpse the splendor of Vijaynagar in its ruins where Hospet’s Virupaksha temple rises majestically. The most splendid monuments of Hampi is, undoubtedly the Vithala temple complex memories of Hampi will stay with you always.

Revisit Hampi – the 14th century capital city of the Vijayanagar Empire lies in the Deccan Heartland, in the state of Karnataka. The ruins spread over an area of more than 26 sq. kms. Protected by the tempestuous rive Tungabhadra in the north and by rocky granite ridges on the other three sides. A terrain such as this was excellent for a capital city that needed to be vigilant and spend a further day in the heart of the lost empire. Explore Hampi at your own pace. Its monuments- like its centuries- old patience & wisdom- most be savored bit by bit. Overnight stay at Hospet.

Early morning drive to Chikmagalur – nestled in the Baba Budan Hills, Chikmagalur is a clam, serene town full of scenic surprises … hills, valleys, streams and snow-white coffee blossoms. Chikmagalur district takes its name from the headquarters town of Chikmagalur which literally means younger daughter's town. It is said to have been given as a dowry to the younger daughter of Rukmangada, the legendary chief of Sakrepatna. Another part of the town bestowed on the elder daughter is known as Hiremagalur. Certain ancient inscriptions reveal that these two places were originally known as Kiriya-magalu and Piriya-magalu upon arrival Chikmagalur check in hotel.

Belur - This quaint hemlet is 30 kms from Hassan-is located on the bank of the river Yagachi. It was once the capital of Hoysala Enpire, Today unforgettable for its exquisite temples.

Halebid.- is 17 kms east of Belure. The temples of Halebid – like those of Belure – bear mute testimony to the rich, culture heritage of Karnataka upon arrival check in hotel. Overnight stay.

Morning visit to the Mysore Palace evening visit to Chamudishree Temple which is home to an enormous sculpture of Nandi, the sacred bull The 16-foot bull was carved from a single boulder & is traditionally laden with flower garlands each day.

Later transfer to railway station to board the Shatabdi Express at 14:20 hrs for Chennai. Arrive Chennai at 21:25 hrs. Transfer to the little Sea Side town of Mamallapuram (Mahabalipuram), an hour’s drive from Chennai situated on the East Coast of Tamil Nadu has pris time beaches, spanning 20 kms, bright Sun & Crisp Sand, Wrapping up untold tales of the 7th Century. Here time stands still; and presents meet the past. A serene town nested amidst the historical stone sculptures and medieval architecture, that stands witness to the UNESCO rich world heritage – Mahabalipuram. Overnight stay in Mahabalipuram

Today visit to Shore Temple: The most renowned landmark of Mamallapuram is the Shore Temple. Standing alone on the shore, this temple is protected by a wall constructed to minimise erosion. It is believed that at one point in time there were seven such temples, six of them were victims to the natural elements of erosion.

Arjuna's Penance: This quaint little town of Mamallapuram in enriched with ancient with ancient and splendid sculptures. Each of the beautiful works of art has a story to tell. Like the large 27 m by 9 m bas-relief that narrates the tale of Arjuna's Penance. Arjuna here is shown standing on one leg to please Lord Shiva into helping him winback the Pandava Empire. A fascinating combination of humans, animals and celestial beings seem to be rushing to the revered scene. Most prominent among them is a 4.8 m majestic elephant leading a procession. Also known as the Descent of the Ganga, this impressive canvas portrays the life giving River Ganges flowing out from its high source in the Himalayas. Enchanting stories from the Panchatantra are also a part of this magnificent bas-relief. Overnight stay in Mahabalipuram

After breakfast country side drive to Pondicherry presents an unusual combination of European culture & Indian traditions. An added attraction fair is the township of Auroville, an Oasis of Peace & Enlighten.

Auroville - or the ‘City of Dawn’ - was conceived as a place of research into the ideal of human unity by the Mother, the spiritual collaborator of Sri Aurobindo. The idea is to build a futuristic city where people of goodwill can live together in peace and progressive harmony, above all creeds, all politics and all nationalities. Auroville came into existence in 1968. Its Charter says, “To live in Auroville one must be a willing servitor of the Divine Consciousness”, and describes it as “belonging to nobody in particular, but to humanity as a whole”; as a place “of constant progress”; and as “a bridge between the past and the future.” Overnight stay Pondichery

After breakfast A day to taste the charms of this city and its contrasts: the "black city" and its temples very lively dedicated to Ganesh, Shiva or even Durga the goddess of war, its colorful markets. In the white city the churches of the Sacred Heart of Jesus, Our Lady of the Angels or Our Dame of the Immaculate Conception. A walk in the city in cyclo-pousse, in the discovery of the old French districts. You pass by the ocher walls of the Alliance française and the French school created in 1826. Finally the consulate General of France which retains its authentic charm of the 18th century.

Visit to Sri Aurobindo Ashram whose buildings sprawl throughout the town: they also make paper and books, often beautifully bound in silk. The old seafront - Beach Road - makes a lovely morning stroll, there is a museum, several elaborate Catholic churches and 19th century Botanical Gardens planted with around 900 species of plants. In the late afternoon you will not miss making the inevitable stroll along Beach Road. Overnight stay in Pondichery

Third day to enjoy this charming town, You can hier the Tuk Tuk enjoy the colorful market or to stroll at leisure or to enjoy the seaside.

After breakfast drive to scares city of Kanchipuram the “City of seven Pagodas” where we see outcroppings of rock that have been delicately carved into temples and life-sized replicas of elephants, lions and bulls. The carved Penance of Bhaghirata here is the largest bas-relief in the world.

Kanchipuram was one of the main centers of diffusion of Buddhism. You begin the visit of the site to the 7th century temple of Kailashnatha, perfect example of the Dravidian style. Dedicated to Shiva, it is the first monumental temple built in South India. Its surrounding wall is one of the most richly decorated of South India. Then the temple of Ekambareshvara, the holiest of the temples of the city, dominated by its huge gopuram 58 meters high.

Kanchipuram will also tell you the colors of his saris and the art of weaving silk. This craft activity already flourishing at the time of the kings pallavas, is renowned throughout India. Overnight stay in Kanchipuram

After breakfast drive to Madras and visit the city. Not far from the beach of Elliot Beach are the headquarters of the Theosophical Society whose park is home to a dozen temples, all religions combined, and a rich library. Continuation by visiting the Sumukha Gallery which exhibits contemporary Indian artists. End your day with a walk in the famous temple district of Mylapore. You can also see the small church Luz Church and the basilica Sandhome. You then cross an ancient district, filled with colorful Hindu temples, an ideal stroll at sunset. You end your stay in the neighborhood of Besant Nagar, on the beach of Elliot Beach, a small corné of paradise, clean and calm, in this immense metropolis. Transfer to the airport to board the flight for onward destination