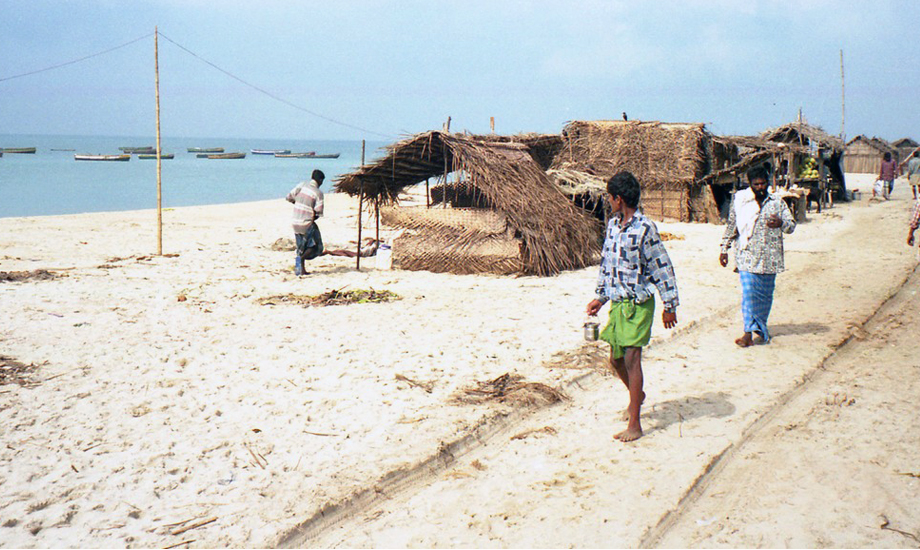 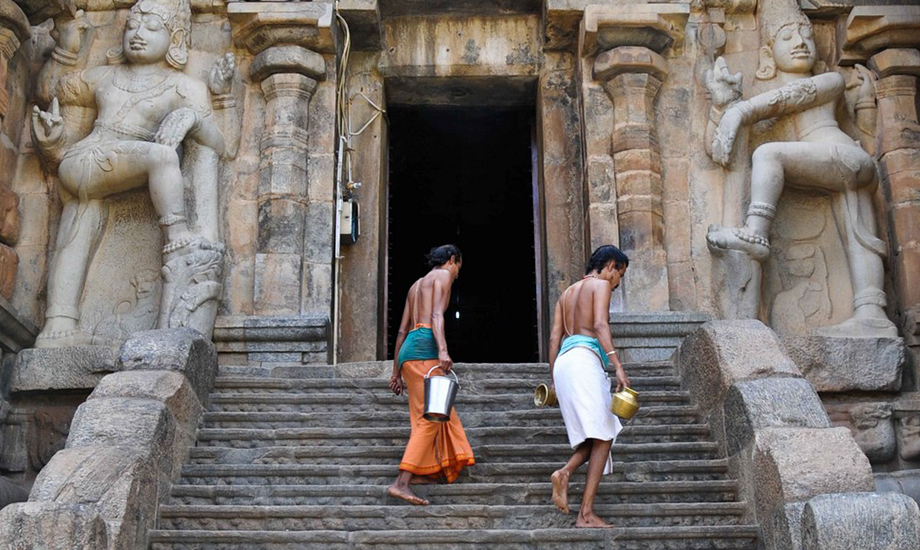 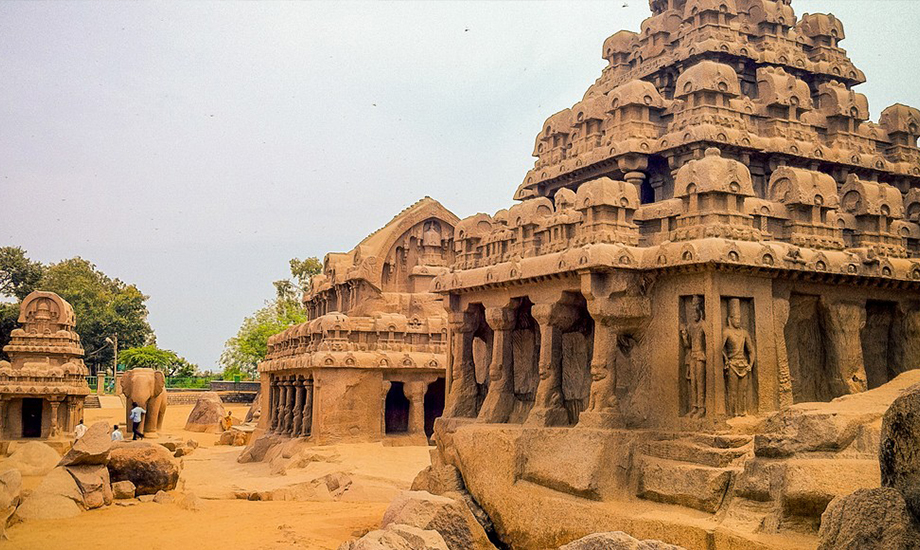 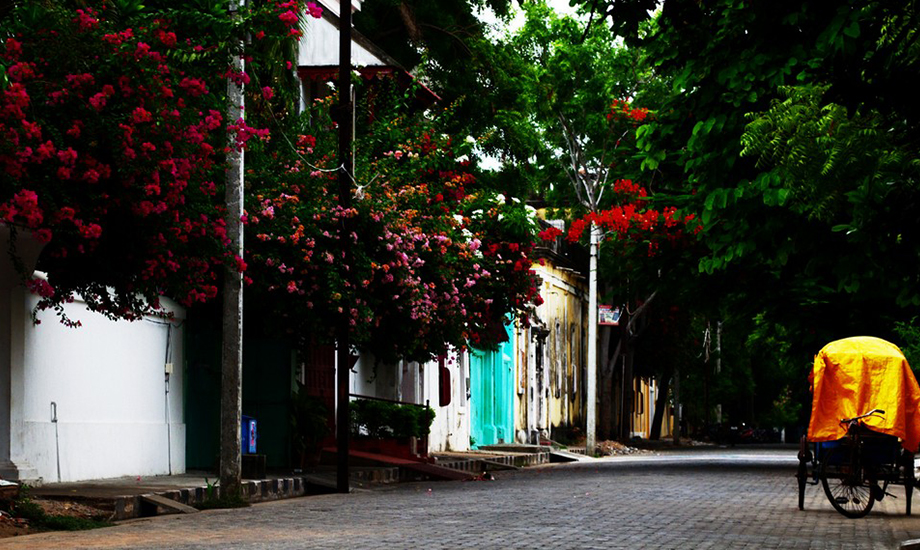 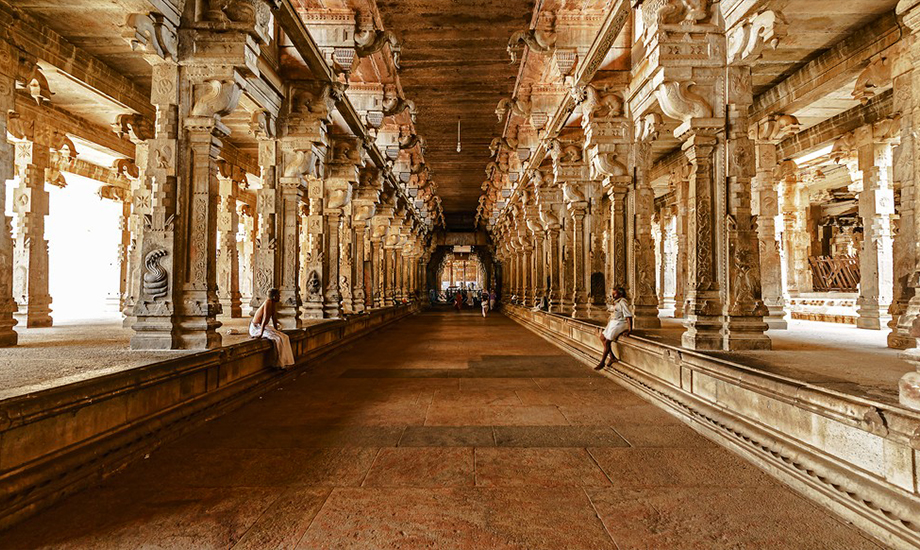 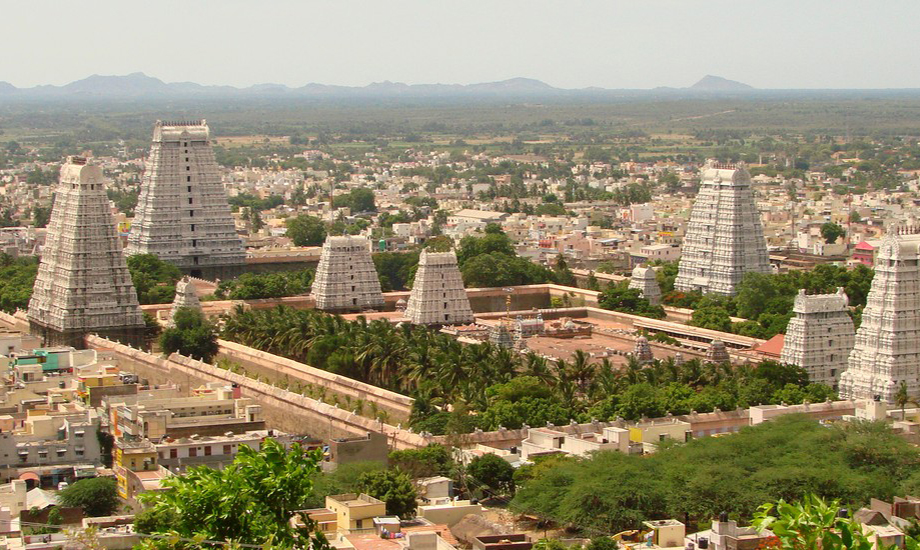 Trip to Tamil Nadu in south-eastern India will introduce you to the Tamil country and the cradle of Dravidian culture. This tropical area covered with rice fields is distinguished notably by its extraordinary architecture which will delight the lovers of History and spirituality. The temples and shrines are here millennia and the faith of pilgrims unshakeable. A small stop in Pondicherry, former French counter will plunge you in the former capital of the French Indies.

Arrive Trivandrum International airport meet and greet transfer to the Chowara beach in the south of the country.

Morning drive to Cap Comorin, where waters of the Arabian Sea, the Indian Ocean and Bay of Bengal meet dedicated to Devi Kanya (Parvati).  Kanyakumari – is India’s Land’s End. It is one of the Pilgrims centres of India. A fine beach landscape with stands of different of colors is another interesting aspect of Kanyakumari. Palm leaf utility articles of Kanyakumari are very famous upon arrival check in hotel.

Visit to Gandhi Memorial – in memory of the father of the Nation, Mahatma Gandhi, and a Mandapams has been erected near the temple. Our sightseeing continues to Vivekananda Memorial – there are two rocks projecting out of the ocean, south east of Kanyakumari Amman temple. These rocks provide an ideal vantage point for visitors desiring to view the land’s end of India. It was one of these rocks that Swami Vivekananda set in long & deep meditation. On this rock stands the “Vivekananda Rock Memorial” built in 1970 – a blend of all the architecture style of India.

After breakfast drive to Nectar City of Madurai, Meenakshi temple where Dravidian Temple architecture may be seen in its exuberant baroque phase, Its hall of thousand pillars is fabulous & is filled with worshippers at all hours of the day, another terrific photographic opportunity. Afternoon visit the Tirumal Nayak’s Palace, which is in a highly decorative monument. Its enormous roofed arcade supported by 48 - foot high stone pillar, still stands. In the evening take auto Rickshaw passes through the market to reach and see the aarti ceremony in the evening in Meenakshi temple. Overnight stay

After breakfast departure to the island of Rameshwaram also called the "Venice of the south", important center of Vishnuite and Shaivite pilgrimage.

Visit of the temple of Rameshwaram, one of the major temples of Tamil Nadu, built in the 12th century. This temple with Dravidian architecture is especially renowned for its 4 magnificent corridors with finely carved columns. Only the Hindus can penetrate the sanctuary. Visit of the temple of KOTHANDARASWANY, located 12 km to the southeast of the city. Overnight stay

Morning drive to Trichy - was a Chola Citadel during the Sangam age & was also briefly ruled by the Pallavas & the Pandyas. Today, Trichy is a blend of history, a pilgrim center and a thriving commercial city. Visit to Rock Fort the 83-meter high rock fort is in the center of the Trichy. Its 344 rock-cuts steps take one to the Uchipillayar temple dedicated to Lord Vinayaka. Half way up is the temple of Lord shiva dedicated to Thayumanaswami. Jambukeshwara Temple here has Shiva lingam almost submerged in water. Overnight stay.

After breakfast depart for Tanjore, musical capital and rice granary of India, one of the largest religious centers of India from the south. It was once the capital of the Chola, the most brilliant kingdom of this region. Tanjore was the capital of the Chola kings whose origins go back to the beginning of the Christian era. Visit Brahadeshwara temple and its fortress. Built by Raja (985-1014 AD), Brahadeshwara temple is the most complete model of the Chola era. This prestigious building, which is one of the few Indian monuments listed by UNSCO the World Heritage, deserves a visit.

At the top of the 63 meter high temple, a dome houses a huge lingam of SHIVA (accessible only to Hindus). Built in a single block of granite weighing 81 tons, the dome was conveyed by a 6 km earthen ramp in the manner of the Egyptian pyramids. Visit of the city and stop to discover local crafts, musical instruments, painting on glass, sculptures. Overnight stay.

After breakfast departure to Kumbakonam and visit of the city, its 18 temples dedicated to Shiva or Vishnu, filled with several richly colored Gopuram. Visit the Sarangapani temple, the largest, dedicated to Vishnu, dating from the 12th century, in the shape of a trolley, with a portal 50 meters high. Visit to the biggest Kumbeswarar temple, dedicated to Shiva in which one penetrates by a huge Gopuram with 9 levels. In the temple you will see a lingam that would have been modeled by Shiva with sand and nectar of immortality. Visit of the Nageshwara temple, Chola temple of the 12th century, then the basin of Mahamakhan.

Our drive Continued to Chidambaram - This has been the home of noted Tamil poets and saints. It was in this holy city, that the chola king Raja Rajan redeemed the fines poems of the Nayanmar, the great Saivite savants. The great Nataraja Temple of Lord Shiva as the cosmic dancer is the highlight of the Dravidian temple architecture. Chidambaram was the capital of the Cholas between 907 to 1310 and the temple was built during their late period. It is also unique in the sense that it enshrines both Shiva and Vishnu under on roof. Chidambaram is also famous for its 10 days Chariot festivals in December & January. Later drive to Pondicherry Check-in at the hotel. Overnight stay

After breakfast visit to Pondicherry, this former small fishing village "poudouchery" was bought in January 1673 by the company of the Indies. Discovery of the white city with colonial charm, rebuilt in the eighteenth century, formerly occupied by the French
Today it is an unusual combination of European culture & Indian traditions. An added attraction fair is the township of Auroville, an Oasis of Peace & Enlighten. Another hallowed spotted Aurobindo Ashram which drowse devotees from all over the world, visit the Sri Aurobindo Ashram.

Auroville - or the ‘City of Dawn’ - was conceived as a place of research into the ideal of human unity by the Mother, the spiritual collaborator of Sri Aurobindo. The idea is to build a futuristic city where people of goodwill can live together in peace and progressive harmony, above all creeds, all politics and all nationalities. Auroville came into existence in 1968. Its Charter says, “To live in Auroville one must be a willing servitor of the Divine Consciousness”, and describes it as “belonging to nobody in particular, but to humanity as a whole”; as a place “of constant progress”; and as “a bridge between the past and the future.” Overnight stay Pondichery. Overnight stay

After breakfast departure for Mahabalipuram en route visit to Tiruvannamalai, a small town built at the foot of the sacred mountain Arunachala. This vibrant city is an important Shaivite center and has more than 100 temples. Beginning of the visit of the city and the temple Arunachaleswar, "Arjuna the immutable" dedicated to Shiva-Parvati, one of the biggest temples of India (Open from 6h to 13h and from 17h30 to 22h). This Hindu pilgrimage site contains four magnificent Gopuram built at the four cardinal points, spanning more than 10 hectares. The main, composed of thirteen levels, is more than 66 meters high. Later drive to Mahabalipuram Overnight stay.

Morning visit to Shore Temple: The most renowned landmark of Mamallapuram is the Shore Temple. Standing alone on the shore, this temple is protected by a wall constructed to minimize erosion. It is believed that at one point in time there were seven such temples, six of them were victims to the natural elements of erosion.

Later day return excursion to Kanchipuram the “City of seven Pagodas” where we see outcroppings of rock that have been delicately carved into temples and life-sized replicas of elephants, lions and bulls. The carved Penance of Bhaghirata here is the largest bas-relief in the world

Discover Trukkalikundram hill "hill of the sacred eagles", important center of popular pilgrimage where a 16th century temple is also dedicated to SHIVA of which the panorama is exceptional. Then visit the Ekambareswaram temple dedicated to SHIVA, a masterpiece of Dravidian architecture. Later back to Mahabalipuram for overnight stay

The little Sea Side town of Mamallapuram (Mahabalipuram), known for its UNESCO-listed temples situated on the East Coast of Tamil Nadu has pris time beaches, spanning 20 kms, bright Sun & Crisp Sand, Wrapping up untold tales of the 7th Century. Here time stands still; and presents meet the past. A serene town nested amidst the historical stone sculptures and medieval architecture, that stands witness to the rich heritage – Mahabalipuram. . Your home for 2 night’s Overnight stay at Mahabalipuram

Arjuna's Penance: This quaint little town of Mamallapuram in enriched with ancient with ancient and splendid sculptures. Each of the beautiful works of art has a story to tell. Like the large 27 m by 9 m bas-relief that narrates the tale of Arjuna's Penance. Arjuna here is shown standing on one leg to please Lord Shiva into helping him winback the Pandeva Empire. A fascinating combination of humans, animals and celestial beings seem to be rushing to the revered scene. Most prominent among them is a 4.8 m majestic elephant leading a procession. Also known as the Descent of the Ganga, this impressive canvas portrays the life giving River Ganges flowing out from its high source in the Himalayas. Enchanting stories from the Panchatantra are also a part of this magnificent bas-relief. Overnight stay

After breakfast say good bye to this fascinating land and departure transfer to Chennai International airport to take the flight for onward destination.